Is Skopelos the perfect Greek island?

Αuthentic hilltop towns, empty beaches, and characterful tavernas frequented by hordes of pregnant cats —Skopelos has nearly everything a visitor to Greece could ask for…

My seven-day stay on Skopelos had passed blissfully free of reminders of Meryl Streep, Abba, or Mamma Mia! —the saccharine musical shot here almost a decade ago. But then our coach driver, who was taking us to the ferry terminal for our journey home, intervened. Fifty grumpy holidaymakers —with just a day’s travelling standing between them and a return to work— were subjected to the entire soundtrack blasting out over the coach PA system. Faces never looked so thunderous.

So completely at odds was the unrelenting awfulness of the music with the low-tempo week that preceded it, it was hard to believe that film had anything to do with this island. Far from becoming home to themed bars and overcrowded beaches, Skopelos has maintained a refreshing authenticity. For many visitors it epitomises the appeal of Greece as a holiday destination —unspoilt island life; unpretentious food and accommodation; quiet beaches; walks through green, mountainous interiors; and a complete removal from the stresses of modern life.

Is it the perfect Greek island? There are finer beaches and more characterful villages to be found elsewhere, but Skopelos ticks most of the boxes.

There is something about arriving by ferry at a picturesque Greek port that has an immediately relaxing effect. Arrival at Skopelos is no different. Getting to the island itself is no mean feat, a fact that has surely contributed to keeping visitor numbers at a manageable level. The island has no airport, so the quickest way to get there by air is via neighbouring Skiathos, home to one of Europe’s shortest and narrowest runways —look out for the smartphone-wielding tourists taking pictures as you touch down.

But any stress suffered by nervous fliers soon melts away. An hour-long ferry ride follows. It skirts the island’s rocky and forbidding northern coastline before Skopelos Town suddenly comes into view, as unexpected as it is eye-catching. It is one of the most beautiful ports in the country, the archetypal hillside sprawl of dazzling white walls topped with terracotta tiles, with a ruined Venetian fortress overlooking, and dozens of chapels scattered within. The peal of church bells welcomed us, and the stresses of the day —we’d left home about 10 hours earlier— were instantly forgotten.

What Skopelos lacks in ruins, museums and art galleries, it more than makes up for with monasteries. There are dozens scattered around the island, including perhaps 10 on Mount Palouki alone.They make for a perfect ecclesiastical crawl —what more innocent, life-affirming activity could there be?

Each monastery comprises suntrap courtyards, a dusky chapel filled with glittering icons and intricate altar linen, and chirping birds in cages. Some —such as Evangelismos, built in 1712 and the only one visible from town; 16th-century Sotiris, manned by a single, rather grumpy monk; and Prodromos, where a female custodian, in gratitude for our donation, doused us liberally with pungent cologne —can be reached by car, but the dirt road soon becomes a donkey track, so it is better to walk. From Sotiris, you can join the T1 walking path (there are three other marked routes on the island). It meanders up the mountain, and darts in and out of the forest —ensuring moments of blessed relief from the summer heat. However, vigilance is essential, thanks to the uneven terrain and the countless spider webs that criss-cross the track through the trees. They wait to swat the unwary rambler —a nuisance for most; terror for arachnophobes such as myself.

The path ends at the atmospheric abandoned monasteries of Taxiarches and Anna, both partially hidden by overgrown walnut trees. It’s a wonderful route, overwhelmingly green, teeming with life and with dramatic views of Alonnisos, the next island in the Sporades archipelago, yet remains largely untrodden. Besides the monks, and the obligatory goat herd with his bleating livestock, we had the entire mountain to ourselves. Even the chapel of Agios Ioannis on the north-west of the island, which perches, Meteora-style, atop a 100m-high rock and is the best-known Mamma Mia! location (it is where the wedding scene was shot), we found deserted, while no more than 10 people occupied the beautiful beach below it. 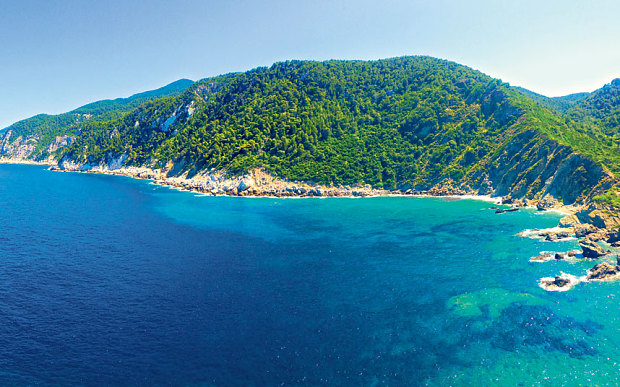 There are two absolute gems on the island, Skopelos Town and Glossa Village —in the far north-west— so try to find accommodation within striking distance of one of them. The former makes the most concessions to tourists —there are vehicle-hire firms and hotels on the outskirts, a few mediocre restaurants offering reliable Wi-Fi on the seafront, and even a souvenir shop or two— but it still retains much of its charm. The kafeneon still attracts a clutch of old boys, who gossip and play backgammon over coffee like a scene out of a novel by Louis de Bernières; coiffured young islanders whizz down narrow alleyways on scooters; their plump grandmothers curse them, broom in hand; and a battered old fish van prowls up and down calling prices on a loudspeaker.

Glossa, its whitewashed houses clinging to even steeper slopes, is more authentic still, making almost no allowances for outsiders. We spent a pleasant couple of hours there, clambering gamely through the lunchtime heat, onwards and upwards, along eerily quiet, shrub-filled streets, past shuttered homes filled with residents at siesta, and a couple of sleepy stores selling olive oil, plums and honey, to the town square. An oasis of shade, overlooked by a church and a café, it has perhaps the finest views on the entire island. 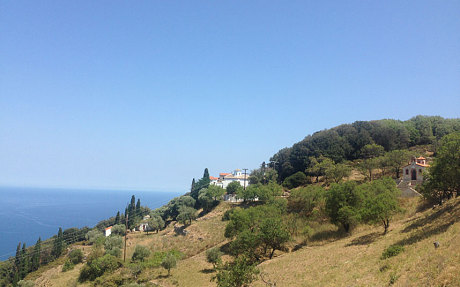 One of the monasteries on Mount Palouki (up)
Agios Ioannis (below) – Photos: Oliver Smith 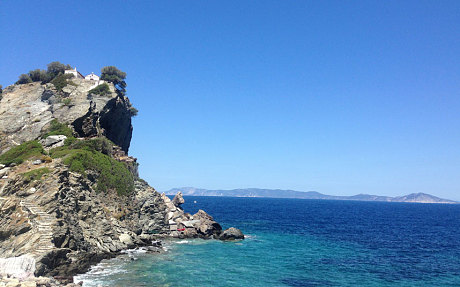 A Greek island is nothing without its beaches, and, while those on Skopelos are largely shingle or pebble, they are picturesque, backed by rocky green hills, and quiet. The closest to the capital is Glysteri, on the road north out of town and reached via a scented valley dotted with olive trees, but the best are found on the west coast. Limnonari, on the coastal road north from Agnontas, hemmed in by rocky headland, is as close to a truly sandy beach as you’ll find. Kastani, a key Mamma Mia! location, is equally pretty —but is the only place on the entire island that gets overcrowded.

For real solitude, rent a motorboat from Panormos, and head north —you’ll find beautiful spots all the way up the coast (such as Hovolo, Ftelia and Neraki) that are inaccessible to cars and subsequently occupied only by other couples who have rented motorboats, and the occasional determined German naturist.

The above content is an excerpt from the original article, published in “The Telegraph” (telepgraph.co.uk).