Faced with the hundreds of islands that litter the map of Greece, I’ve always wondered how people choose their favourites. On Skopelos, however, the locals know why theirs is utterly unique: it’s quite simply the greenest. “Five million pine trees, 50,000 olive trees, and 5,000 people,” they tell you, and while the stat might need updating to account for expats, the island is basically a string of low hills covered in dense virgin forest with the occasional orchard or hamlet in between.

As it had rained before my arrival, the place was budding out of control. “Too green, too green,” cried one man as he drove me to collect my hire car, covering his eyes to protect them from the chlorophyll. “We are the greenest, bluest island in the Mediterranean – that is official.” George D. would like to see the island regain its former glory: “It’s like the tropics here, and Skopelos could be totally self-sufficient as it was in ancient times. If we want to, we can grow anything here – fruit, vegetables, wine, oils, homeopathic medicines. If it was my island, I would ban cars, fix a limit on the population and create a wholly green island.” He shows me an ancient Skopelitan coin that was used as the main symbol of last year’s Olympic Games: “It’s all about the fair fight, the competition – to prove which island is the best.”

If that all sounds rather energetic, the second reason people give for returning to Skopelos is the tranquillity. Apart from church bells, and the occasional dinging of a goat’s necklace, it is utterly peaceful once you get away from the Paralia – the prom on the main bay – and the small cluster of shopping streets. Skopelos still has no airport and no big coaches. There are too many steps across Skopelos Town to use cars or mopeds – everyone walks, keeping even the octogenarians lean and fit, and the rubbish is collected by donkeys. Everyone rests well too: at around two in the afternoon you will hear most locals quietly announce “kalo mesimeri” – or “have a good siesta” – as they slope off for a nap.

It was not always thus. Thanks to its abundant fresh water, the island used to be one of Greece’s most important trading hubs, producing fine wines and olive oil, and building the ships to take these as far as Odessa. From the pre-Christian era right through to the 20th century, Skopelos was on a major shipping lane and has hosted almost every major conquering force from the Macedonians to the Nazis. An impressive small museum up a back street condenses the archaeological finds and changing economic fortunes into a colourful potted history. Phylloxera killed off the wine industry in the 1940s, though a cooperative is beginning to experiment with new vines. The olive oil industry is still a major island asset, along with organic honey and delicious plums – the prunes are said to be the best in the world, and even biotech-friendly Californian producers refer to Skopelos as the benchmark for quality.

The shipbuilding is long gone, but Skopelos retains a legacy of its days as a cultural entrepot in the prevalence of rembetiko music. Something like the Greek equivalent of blues, this folksy fusion was cultivated by migrants in Asia Minor and the Black Sea and brought back home. Several gifted musicians live on the island: there are gigs throughout summer at Anna’s restaurant and at the ouzeri inside the ruins of the Venetian Kastro (castle) which is run by renowned bouzouki player Giorgos Xindaris.

There are a handful hotels on Skopelos, but most visitors rent an apartment or villa. Far from being an opportunity to eat beans and toast and hide from Hellenic civilisation, self-catering is probably the best way to access the rhythms of the island. Shopping for food is as natural an encounter as you can have with an island where farm produce is everything. The nicest town houses have stone walls and floors, and are painted in lively colours, with wooden balconies overlooking the port. There are flowering shrubs – especially jasmine – everywhere in Skopelos, their aromas drifting up on the evening breeze.

The streets and steps are brushed and washed every day, and while close-knit and countrified in its routines, Skopelos seems a proud, sophisticated town. As ubiquitous as the flowers are the 150 small churches – built by well-to-do families as status symbols, the 19th-century equivalent of the unused conservatory. It’s worth noting which belfry is closest to your villa, as these tend to be the highest points and in the labyrinth of unnamed, whitewashed, terracotta-roofed houses, it’s easy to get lost – I finished up being ferried around by quasi-bilingual locals until a taxi driver recognised the name of my numberless villa (in my unnamed, whitewashed back street).

Great for meeting the neighbours, these steep alleyways are agony with shopping bags. In the heyday of unofficial maritime commerce, the winding lanes helped Skopelitan pirates evade capture and provided countless dark corners in which to stash the loot.

The closest pair of beaches – Stafylos and Agnontas – are nice enough and can be reached on foot, but it’s worth heading north to visit Panormos. The name means “the perfect harbour” and while deep enough and sufficiently sheltered for the island’s traditional caiques and fishing boats, it is also ideal for snorkelling and swimming. Neighbouring Milia and Kastani are also good for a bathe, and all have at least one taverna doing grilled fish, sandwiches and cold Mythos beer. As these are western beaches, facing Skiathos, there is generally little or no wind, and Panormos also boasts the most impressive sunsets on the island.

Further north still is the minuscule hamlet of Old Klima, which was devastated by an earthquake in 1965 and now has a winter population of just three – many abandoned houses still contain their original furniture, waiting for the spirit of their owners to come back. Sprawling over a hillside next door is the island’s second town, Glossa, which has barely altered in response to tourism. Houses are shuttered much of the day, and the high street is a string of sleepy stores selling ankle-length black dresses and dusty bottles of Metaxa – though one shop does find the energy to do radio ads to promote its eclectic stock of “dog food, jewellery and alcohol”. 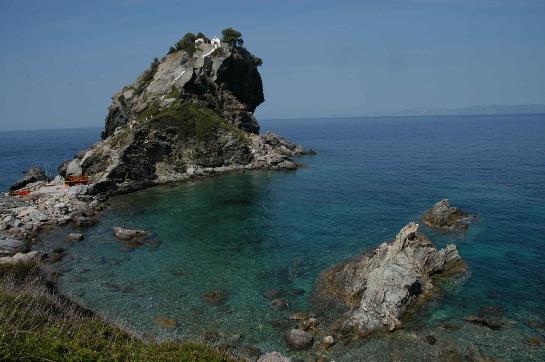 Two beautiful beaches, and an impressively sited church, are at Agios Ioannis, reached by a winding road that starts just outside Glossa. It’s the jagged rocks framing the cove that make it so special, and nothing blocks the view east to the island of Alonnissos except for the ferries and catamarans that pass in the distance every half hour. Beyond here is the northernmost tip of the island, Cape Gourouni (Pig), and two more tiny strips of sand, Fat George Beach and Dead Woman Beach. Naturists seem to have chosen the latter for their exhibitionism, though they already have a semi-official strip of sand near Stafilos.

Buses depart six times a day for all the main villages and beaches from the Paralia. If you plan on exploring the scenic routes, get a bike, motorbike or jeep. The unmetalled roads quickly become genuine off-road challenges, and while the views from the Delfi and other high points are stunning, the road chicanes along the edge of cliffs and there are no barriers except for the pine trees, and no road signs.

This is one of the places urban Greeks come to in July and August and their presence may account for the quality of the food: the cheese and spinach spiral-shaped pies are overrated, but the ouzeri scene is lively, turning out moreish mezzes of chard, octopus, peppers and garlic-laced yoghurt, while cosmopolitan restaurants serve delicious mains of grilled fish, prawns in bacon or lamb roasted with the famed plums. Several pastry outlets – including a French patisserie – bake bread and gooey cakes.

Since you can’t sell souvenir tat to natives, even the shops are stylish. Between all the little grocers’ stores (there are no big-name supermarkets) are locally managed outlets for beach gear, fine silverwork and designer clothes. The ceramics are rated highly even by seasoned collectors, and one local potter produces elegant old-style undecorated black-glazed amphora, wine jugs and small bowls. There’s also an ancient artisan who makes to-scale, seaworthy replicas of galleons and clippers using original shipbuilding techniques – he receives commissions from VIP clients, and did a ship for George Bush. It’s not a tourist thing – it’s the only way he can use his skills now that the big boats are moulded in Scandinavia, and in any case his models can cost anything from €10,000 to €20,000.

Very green, very Greek and very serene, Skopelos is atypical of the Aegean islands. On the last evening, I went out to survey the town from the balcony. My lemon trees were ripening, my jasmine was sweating in the heat, the radio was playing its twangy, passionate folk. The neighbours were beginning to say hello and I had some fresh fish in to concoct my next meal. So long as Skopelos lacks an airstrip, it will continue to repel the quick-fix hordes, so its future state as a refuge from kitsch and clamour is more or less assured – and while Greeks continue to favour it for their own summer hols, British travellers can luxuriate in being a welcome minority. Alternatively, the Skopelitans might try the self-sufficiency experiment, and shut the place off. It’s a bit small for a lifetime, and you could tire of oil, honey and plums, but I can think of worse places to be stranded.