The island is small enough that you can give yourself to this game of exploration for every day of your stay there, and never actually get lost...

The cloudy skies of this reluctant May are trying their best to hide the fact from you, but summer is upon us. But you should know that because if you haven’t already planned in detail which beaches you’ll be lounging on this year, you surely are looking around right now. Right? Oh dear. Let us help you out. Picking a worthwhile holiday destination is never easy, and each year the loud, colorful unmissable opportunities multiply, as do the travel agent and enthusiasts intent on forcing each and every one upon us.

Chances are, you’ve seen your share of the overcrowded tourist traps that litter the most beautiful coasts of the world, and you’re really not looking forward to another month of digging cigarette butts out of the sand before you can lay down to roast as you deserve. The Greek isles are famous for their start beauty and pristine seas. Unfortunately, some of them are also known for their floating party barges and drunken revelers littering the sea shore, and yes we’re specifically thinking of you, Mykonos.

Luckily, there are many smaller, less developed paradises to reach, and some are even comparably easy to get to. Ladies, consider the Sporades. As an unassuming group of three small islets just off the coast of mainland Greece, you’d be forgiven to have overlooked them in the past. You’ll never make that mistake again. The islands are Skopelos, Skiathos and Alonissos.

Skiathos is an up-and-coming holiday resort frequented by the rich and famous. Alonissos is an unspoiled, largely agricultural island. Skopelos offers the best of both worlds. Getting to the Sporades is easier than ever, thanks to the new civil airport in Volos, which Ryan Air and several larger companies fly to regularly, these days. Getting a flight to Nea Anchialos won’t be as easy as hopping on a plane to Rome or Paris, due to the lower traffic volume, but prices are modest and run when it matters: throughout the summer!

Once in Volos, Skopelos is a short ferry ride away. The ride is only a few hours in the slower, car-carrying ferries, and barely over an hour in one of the many hydro-jet ferries. There typically are half a dozen runs of each type of ferry a day, though you should plan your times a little, since most are either in the morning, or in the late afternoon.

The ferry will first exit the gulf of Volos, and then head to each island in turn. Skopelos port is the second stop. Landing at the ferry port is a little like arriving at a Wild West town. You’ll be faced with civilization at your back, in the form of the tonnes of steel that brought you there, and a dusty road lined with a few bars (try not to think of them as saloons) and many Greek bakeries selling assorted pies and refreshments.

Of course, most Wild West destinations did not have a cool breeze coming from the sea at your back, and the sound of seagulls soothing your travel nerves. There is a lot more to Skopelos than meets the eye, but nothing that can take away that perfect sense of peace and simplicity that will envelop you during your stay on this beautiful island.

There are, of course, hotels, but the best way to enjoy Skopelos is to get a room in one of the pensions that advertise vacancies just a few hundred meters away from the port. You’ll settle into a nicely air-conditioned room with en-suite facilities, open your balcony and step out to enjoy the view, which if you’re lucky will include either nature or a well-tended garden.

The actual municipality of Skopelos is the largest, and features intricate, medieval stone roads and arches dotted with artisanal shops that will make you squeal. There is handmade jewelry, clothes, local delicacies, and a host of typical Greek and island souvenir shops. The town climbs a hill with its paved paths and terraces, and there will be tavernas and restaurants enticing you on each level, as you climb your way up and down the perfectly picturesque passageways.

The tavernas and enclosed restaurants, bars and cafes, each serve typical Greek foods, in typical Greek portions, and so you won’t be disappointed whichever you choose. Prices are comparable with good-quality mainland restoration, so you won’t have to watch yourself, or the menus. Just enjoy.

Once you’re settled in from your day on the town, you can climb up the white-stuccoed staircase to the town’s only bar, for which you won’t need to know a name, since it literally is the only bar that serves drinks at night, to enjoy some trademark Greek night life as you overlook the sea, where the town’s lights reflect quietly.

The next day, you can either rent a car or a moped, to explore the island a little. There is a perfectly functional bus service, and you can even walk to most beaches, but let’s get serious and enjoy the breeze of a moving vehicle. There are exactly three main roads through the 100 or so square kilometers of Skopelos. They lead out from the main municipality of Skopelos to the various destinations North, South and West of the island, and that’s it. There are of course, other, smaller roads that lead to the smaller villages and locations, but as far as large, two-lane streets, that’s it.

The best way to enjoy the island is to explore it. There are a dozen well-known locations that offer well-organized beaches with umbrellas and recliners by perfect, crystal clear waters, such as Agnontas and Limnonari, both on the South of the island. They are perfectly fine, but also just offer what you could be having at just about any other Greek holiday destination.

Getting in the spirit of Sporadic exploration means picking a random turn-off, and driving its length until the destination. It will inevitably be close (it’s a small island), savagely gorgeous, and feature some delightful variation of pebbled beaches with large stretches of pristine sea of colours that you thought only existed in tropical photography.

The island is small enough that you can give yourself to this game of exploration for every day of your stay there, and never actually get lost. Losing your way in Skopelos requires several lobotomies and permanent blindness, and even then it’s not a sure thing. The one game you must play before leaving involves taking off the first mountain turn that you find coming out of Skopelos, and to try and crest the large hills that cover most of the island’s surface. It won’t be long before you find, you know… that church. 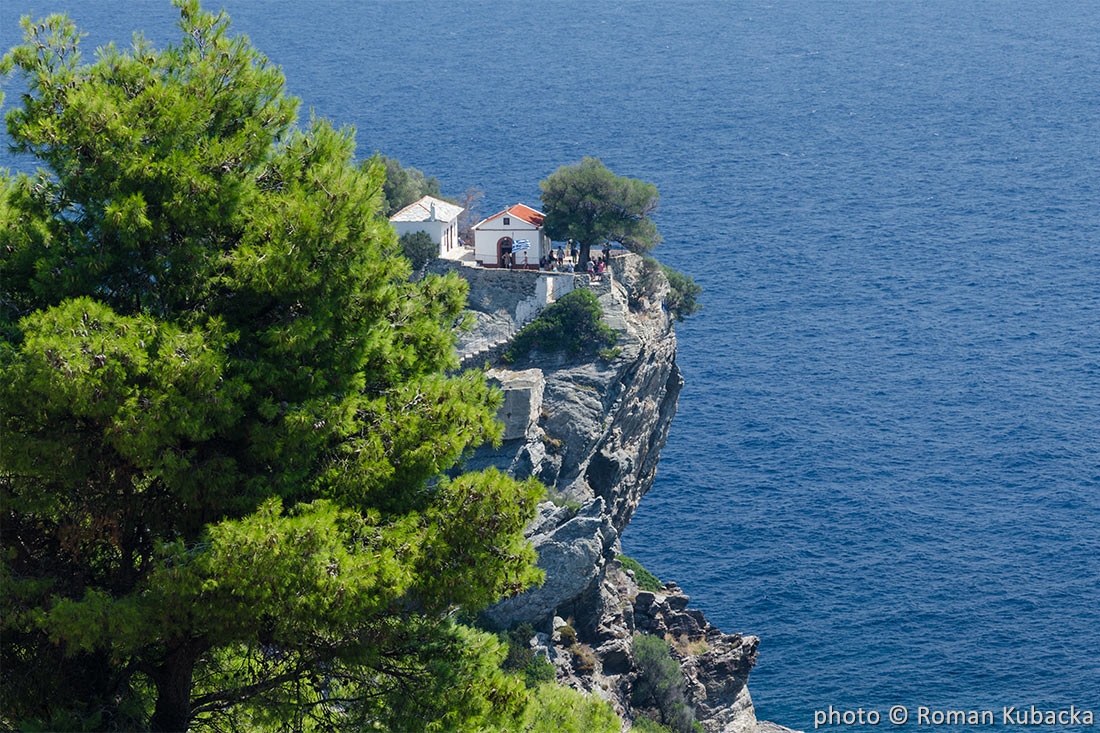 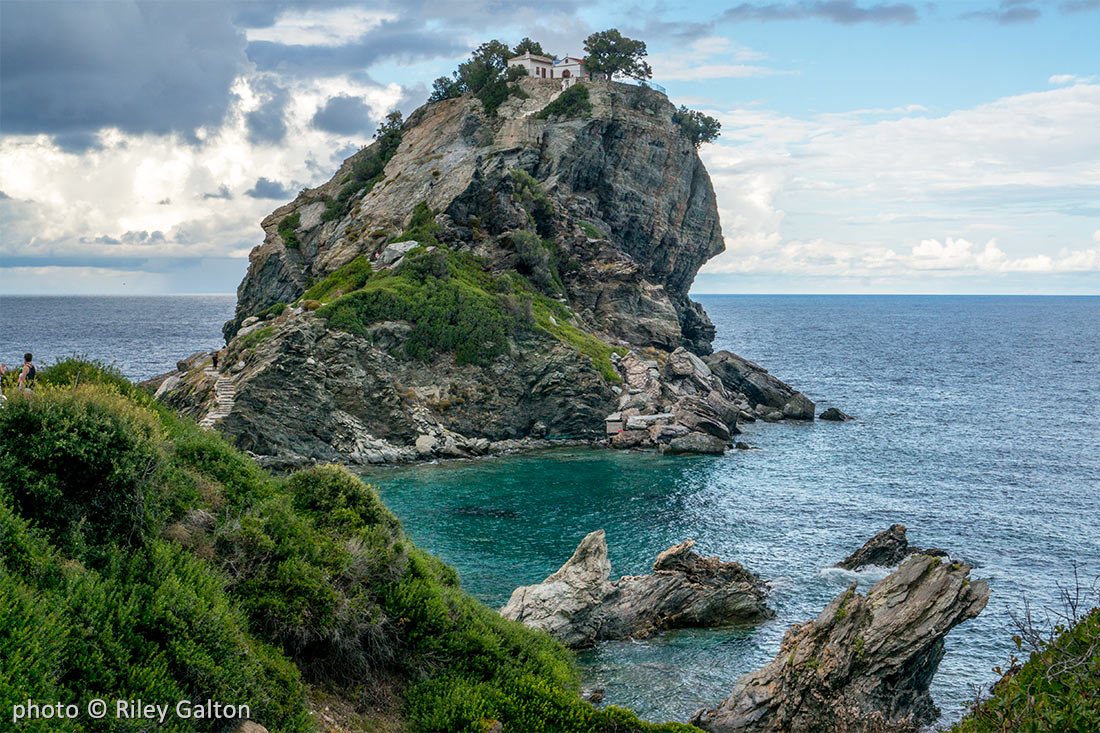 Agios Ioannis, Kastri is the name of the minuscule, delightful church where several exterior wedding scenes for “Mamma Mia!” were shot. The location was heavily modified to make it look taller and more colourful in post-production, but the little church standing on that rock outcropping loses none of its magic in real life.

Agios Ioannis is not too far from Skopelos itself, only about half an hour’s ride away. It’s not easy to get to, as the roads that lead to it were definitely not meant for any kind of traffic. Getting to the church itself means first going down a steep hill, and then climbing up precarious steps carved in the side at the large rock outcropping.

Once you get up there, you’ll be greeted by a violently white, stuccoed gateway before reaching the church, which is small in the sense that you can walk around it in seconds, and can only actually hold a dozen so people. People you’re very fond of being in close proximity to.

The yard around and behind the church is another story, and offers a spectacular view of the Mediterranean, complete of white sails on the horizon, and spectacular shades of green. It’s a treasure that you should find all on your own, and enjoy as the perfect surprise it should be, just like the spectacular island of Skopelos.